Horse and buggy by Jeff Stark and James Vogel.

The pedestrian walkway of the Brooklyn Bridge is writhing with humanity. Red and yellow streamers, carried on poles like standards, unfurl in the breeze. Three men in flame-shaped crowns arrive at the Brooklyn tower while a stilt-walking beauty queen approaches us from the Manhattan side in an orange headdress with ribbons trailing down her back. She is irrepressible, gyrating, stomping, and waving her arms above the traffic speeding on the tarmac below. A cyclist, finding himself trapped in the midst of the eventide merriment, lifts his bike over his head and wades through the crowd as if he were crossing a great river. The crowd applauds. “One Night of Fire”—a roving celebration of free-spirited revelry arranged by Complacent Nation—has only just begun.

“You are like fire,” yells Akim Funk Buddha, a muscular aerialist from Zimbabwe, who rises several feet above our heads. Hanging perpendicular to the tower, Akim Funk Buddha walks along the tower wall and tears off his shirt. “Let me hear your fire.”

“You are like water,” he says swinging to the crowd on the other side of the tower. Happy with the sounds, Akim waves his arms like a mad orchestra conductor. The band plays and the crowd dances as the sun sets on Manhattan.

“I think the tug-of-war has started,” says a young woman with a splash of gold glitter on her face. “We’re totally going to kick Manhattan’s ass!” Several of us try to make our way to the center of the bridge to lend a hand to the home team, but it’s no use. By the time we’ve moved a few yardspast a female fire sprite and a man with a large, flame-fringed mirror attached to his chestthe game is over.

For the last seven years, 27-year-old William Etundi has organized renegade art events, Web stunts, social experiments, and billboard modifications under the name Complacent Nation to address the rampant “self-satisfaction and complacency” in America. For Etundi, One Night of Fire is a metaphorical funeral pyre upon which Complacent Nation will be immolated and his latest brainchild, TheDanger, will rise.

“Complacent Nation was more about activism and culture jamming,” says Etundi. “The question has always been: How can we live with integrity within a nation that has gone awry? TheDanger is my answer. . . . We choose to live in a way that is engaged. This is how we keep our moments, our days, and our lives exciting. How we keep our blood moving. It’s not political, per se, but it is about putting yourself out there and taking tangible risks.”

It’s not surprising when several police officers appear in the midst of our still growing crowd. More startling is their good-natured indulgence, which seems, in part, due to frequent communication with Etundi and white-clad accomplices (called coaxers). But with the Brooklyn tug-of-war team proving victorious, there is no reason to stay on the bridge, and our musical procession heads into Brooklyn, where we find a convoy of police cars waiting.

Gathered within the 10-acre spread of Cadman Plaza Park, it’s possible to assess our numbers—at least 600 people on the ground and at least as many still on the bridge. The police stand in a loose line just outside the park, watching as the undirected pleasure seekers dance, sing, hula hoop, cartwheel, and exchange gifts of red candy for gold pinwheels. The police are alert but clearly not alarmed.

When the full mass has assembled, a coaxer begins to chant, “F Train! F Train!” and the whole cabal meanders toward the subway accompanied by the beat of the bass drum.

“This is our reward,” says John McGarvey waving a red standard while his wife does the rumba. The McGarveys, who seem older than the average bridge party crasher, explain that they were up at 4 a.m. doing lifeguard duty for a cancer awareness charity.

“But we wouldn’t miss this,” says John McGarvey as the party pauses to dance in the portico of theBrooklyn Superior Court. “This is just pure joy. Pure fun.”

“Please step onto the sidewalk!” says an amplified voice from the police van which is trailing us. The meandering portion of the parade returns to the sidewalk.

“Thank you,” says the man in the van.

“This is great!” exclaims 24-year- old Michael Cameron, an admissions counselor for the New York School of Visual Arts, who is wearing a long towel as a cape and yellow briefs which say “Secret Sneaker.” “We have our own police escort.”

At Jay Street, several police officers hold the F train while we cram ourselves like Shriners into the subway car. It takes three full trains before we are cleared from the platform, hurtling toward someone else’s jurisdiction.

“It’s like New Year’s Eve in July,” observes a man with an orange boa.

It’s an apt description if one were to replace the drunks on the train with musicians, poets, acrobats, and self-proclaimed lunatics. Throughout the cars, people create human pyramids and play blind games of trust; poles and bars become jungle gyms; advertising slots become light-box displays for art; people sing campfire songs and Beastie Boys tunes; concertinas are played poorly and rhymes are laid down flawlessly; kisses and gifts are exchanged; pens and scissors borrowed; seats and water offered; and every time the train pulls into a station, riders scamper to the next car, howling with glee, just in case they are missing something wonderful next door.

Of course, the police are waiting for us at Coney Island. The stiltwalkers—there are two now—duck under the gates and wave to little kids. The crowd skips out into the seaside air. Once gathered on the boardwalk, the marching band leads us past the parachute jump, which is lit an appropriate pomegranate red. Our destination: the long-abandoned Child’s Restaurant. An incendiary video montage, created by Big Noise Films, is projected from the rooftop of DJ Chrome’s biodiesel bus. The effect is breathtaking: flames enlivening a ghostly building at the derelict end of an amusement park with a marching band and over 1,000 people dancing under the stars. It’s like a carnival in a dream.

Then the real fire begins.

Fire twirlers, fire blowers, fire jugglers, fire dancers of every style and skill. Even when the display is slightly maladroit, the crowd is enraptured because this is what we’ve waited for. Yet when the police chief finally enters the circle and brings the show to a halt with an almost staged look of sternness, the crowd erupts into cheers and applause as much for him as for the show.

“It’s not really about the fire,” says a nymph in an orange hoop skirt. “It’s about everything.”

Roman candles and sparklers emerge from bags and folds of clothes, filling the night air with the smell of sulfur and the twinkle of fireworks. On the beach, the wing of a huge phoenix suddenly ignites. The police chief quickly squashes the plan but TheDanger skylarks are undaunted. They dance, wrestle, and play. Eventually, someone runs into the water bare-assed and laughing, and before long, there are more than 50 people splashing in the surf, their skin reflecting in the moonlight. 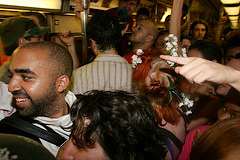 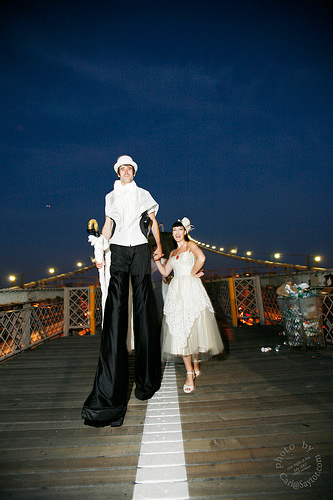 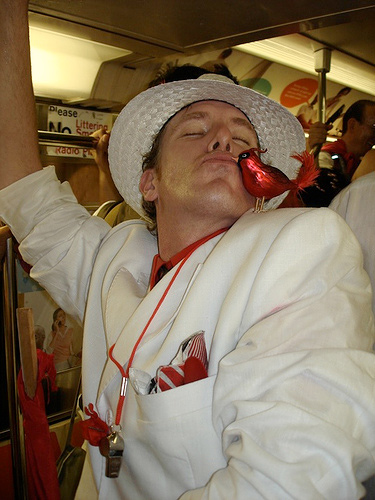 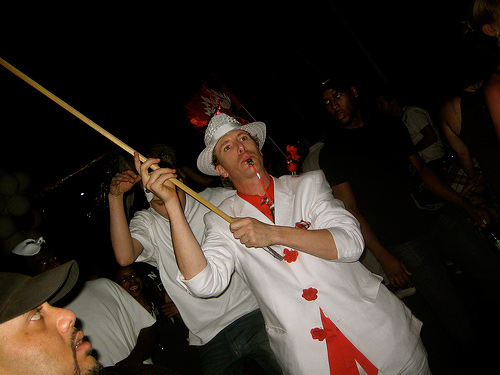 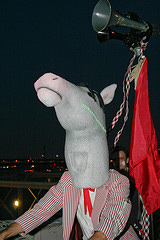