Created by Jester Jamie. Leprecon NYC 2012 and Leprechauns Against Boring Parades Protest
This Saturday, March 17th please join Patty the Leprechaun, Spanky O’Monkey, Laney McLooney and whomever else is feeling the green… That’s right, with St Patty’s Day being on a Saturday that means the annual bar-crawl is on the SAME DAY as the Saint Patrick’s Day Parade and the mayhem should be tremendous.

From 11am-1ish, Please come come cheer on the parade marchers as “Leprechauns Against Boring Parades” in protest of the fact (yes it is true) that the parade organizers – The Ancient Order of Hibernians – do not allow Costumes (or gay groups) to march in the Parade. Under the flag of “Artists for Inclusion” please join us and bring mock-serious protest signs to waive at the battalions of cops, veterans, firefighters and random political groups who march by. The hilarious part is that everyone in the parade loves us but the Hibernians get really angry when the marchers “break ranks” to come take pics with us… At 11am sharp, every major NY area politician marches by so DO NOT BE LATE or you will miss the incredulous reactions of Mayor Bloomberg and a legion of pandering politicians! And beware, protest corral location is usually in this spot but… ya never know… So if not there look around for us— we wont be far.

So come in all forms of green, facepaints or as any Irish, Gaelic or Celtic critter… Be a Banshee, Faerie or a red-bearded Leprechuan. Be something completely different but come out and be prepared to celebrate this day in “traditional fashion” 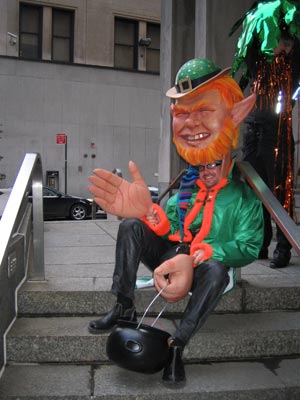